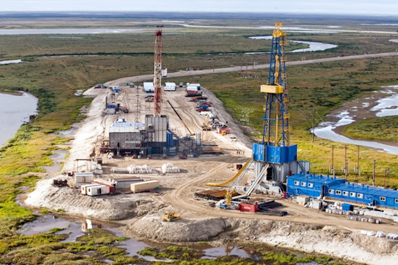 NOVATEK aims to expand its resource base through geological exploration at fields and license areas not only in close proximity to existing transportation and production infrastructure, but also in new potentially prospective hydrocarbon areas. The Company ensures the efficiency of geological exploration work by deploying state-of-the-art technologies and relying on the experience and expertise of the specialists in its geology department, and the Company’s Scientific and Technical Center located in Tyumen.

The Company uses a systematic and comprehensive approach to exploration and development of its fields and license areas, beginning with the collection and interpretation of seismic data to the creation of dynamic field models for the placement of exploration and production wells. We employ modern geological and hydrodynamic modelling as well as new well drilling and completion techniques to maximize the ultimate recovery of hydrocarbons in a cost effective manner. With this approach, we are able to carry out prospecting, exploration and production in a cost effective and environmentally prudent manner.

In 2021, NOVATEK mostly conducted geological exploration in the Yamal and Gydan peninsulas to ensure timely and efficient preparation of the resource base for future LNG projects.

Following seismic surveys and exploration drilling, proved and probable Jurassic reserves within the South-Tambeyskoye field under PRMS standards increased by 339 mmboe (including production for 2021) to 425 mmboe and their commerciality was confirmed. Following the testing of a well with horizontal drain and multi-stage hydraulic fracturing, a commercial inflow of gas and condensate was achieved at more than 1 mmcm per day. A high-density 3D seismic campaign covering 1,300 square km has been completed. By exploring Jurassic deposits and bringing Jurassic wells onstream, the South-Tambeyskoye field’s resource base and the production plateau could be further extended. We have launched the project for pilot production of Jurassic deposits.

A large-scale exploration campaign is underway at the fields belonging to the Arctic LNG 1 project. In 2021, we drilled exploration wells at all five license areas of the project, namely the Geofizicheskiy, Trekhbugorniy, Gydanskiy, Bukharinskiy, and Soletsko-Khanaveyskiy areas. 3D seismic surveys covered 1,580 square km, 6 exploration wells were drilled, drilling of two more wells is underway. The overall progress since the start of activities at Arctic LNG 1 project’s license areas is 7,975 square km of 3D seismic and 14 drilled wells. The exploration campaign has been completed at the Geofizicheskoye field.

As a result of drilling and testing wells of the Geofizicheskoye and Trekhbugorniy fields, the unified structure of the Cenomanian deposit was confirmed. The Geofizicheskoye field’s proved reserves (SEC) increased by 60 mmboe to 1,287 mmboe, the proved and probable reserves (PRMS) are at 2,153 mmboe. Exploration drilling targeting Achimov deposits is underway within the Gydanskiy and the Soletsko-Khanaveyskiy license areas.

The successful testing of an exploration well at the Bukharinskiy license area discovered a gas and condensate field and identified reserves with a high condensate content. The field holding around 35–40 bcm of gas and 2.2 mmt of condensate in estimated recoverable reserves will be the part of Arctic LNG 1 project’s resource base.

Exploration campaign is nearing completion at the Verkhnetiuteyskoye and West-Seyakhinskoye fields. These helped demonstrate the productivity of the Aptian-Albian and Neocomian deposits with high condensate content and allowed us to acquire data on fluid composition for the purposes of LNG plant design.

In order to maintain the pipeline gas production level and the volumes sent to the Purovsky Plant, exploration is ongoing within the fields and license areas located in the Purovsky and Tazovsky districts of Yamal-Nenets Autonomous Region.

The exploration campaign resulted in an increase in the Urengoyskoye field’s proved Achimov reserves (SEC) by 202 mmboe (including production for 2021) to 3,634 mmboe and 5,557 mmboe under PRMS standards. The tests in the Achimov interval without hydraulic fracturing resulted in a commercial gas flow, with the condensate content reaching as high as 800 g per m3 of gas. The work is ongoing within the Osenniy license area for the purposes of maturation and development of Achimov deposits. The logs show that there are pay zones exceeding 20 m in thickness. The testing campaign involving hydraulic fracturing is underway.

Successful wells drilling and testing in the eastern portion of the North-Russkoye field resulted in an increase in proved reserves (SEC). The field’s proved reserves (SEC) increased by 138 mmboe (including production for 2021) to 622 mmboe, the proved and probable reserves (PRMS) are at 777 mmboe.

Following the exploration campaign at the Kharbeyskoye field, an oil production project was launched that could potentially produce more than 1 mmtpa.