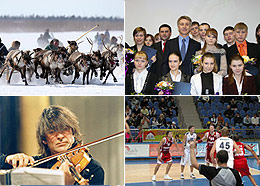 Social Policy and Charity make up an important part of NOVATEK's activities. In 2020, despite the COVID-19 pandemic, the Company continued to pay close attention to projects aimed at supporting the culture, preserving and revitalizing national values and spiritual legacy of Russia, developing mass and high-performance sports. NOVATEK continued to fulfill the Agreements with local governments in the regions where the Company operates, by further implementing the plan for promoting living standards and preserving distinctive cultural identity of indigenous communities of the North. One of the focal points in 2020 was contributing to local epidemic containment efforts through setting up PCR laboratories, purchasing equipment and materials for medical treatment, protective suits for medical personnel, etc.

In 2020, Social expenses and compensatory payments directly invested by NOVATEK and its subsidiaries on charitable projects and activities, cultural and educational programs, and support for indigenous communities amounted to RR4.1 billion, including RUB 671.8 million to assist the regions in their epidemic containment efforts.

Cooperation with the regions

Under the agreements signed with various regions, the Company was investing in Yamal Nenets Autonomous Region and Khanty Mansi Autonomous Region, Tyumen, Chelyabinsk, Leningrad, Murmansk and Kostroma Regions throughout 2020. The Company allocated funds for repairs and upgrades of social infrastructure facilities, sports institutions, and pre-school educational institutions, construction of a contemporary playground for children, repairs of a sewage pumping station in Tarko-Sale, purchase of incinerators to burn wastes, solar panels including portable solar panels, adaptation of residential space and public property in apartment blocks for people with limited mobility to develop accessible environment in Yamal Nenets Autonomous Region. Low-income families, people with disabilities, the elderly, veterans, critically ill and disabled children, as well as people who faced hardships received aid.

Since 2020, the Company together with the Government of the Yamal-Nenets Autonomous Region implements a unique “Teacher for Russia” program aimed at engaging graduates of Russia's leading universities to teaching in small regional schools and preparing young specialists for teaching, as well as ensuring equal educational opportunities for children in different regions of Russia. Seven participants of the “Teacher for Russia” program moved to the Yamal-Nenets Autonomous Region to teach in local schools for the next two years.

In order to further strengthen and expand cooperation with the key regions where NOVATEK operates and preserve existing economic ties, long-term agreements were concluded in 2020 with the Government of the Yamal Nenets Autonomous Region and the Government of Murmansk Region on financing of major projects aimed at improvement and development of the regions' integrated social and economic potential.

In 2020, NOVATEK financed renovation of the Murmansk State Technical University. As part of a pilot project for converting boiler houses in Murmansk Region to liquefied natural gas, the supply of equipment for receiving, storing and regasification of LNG was financed for two boiler houses located in Murmansk and Severomorsk.

Cooperation with Indigenous Peoples of the Far North

During the reporting year, NOVATEK provided financial support to the Yamal for Descendants Association of indigenous peoples and its district branches.

We assisted indigenous peoples through financing the purchase of snowmobiles, gas-fired boilers and technical facilities and aids for clans, equipment and materials required for the work of fishermen and reindeer herders. NOVATEK financed petroleum, oils and lubricants purchases for air delivery of the nomadic population, food and fuel to remote areas. Some dedicated areas of support include taking part in organizing and staging ethnic festivals of indigenous peoples, supporting cultural heritage (financing of the Limbya Nomad Camp), performing emergency prevention archaeological activities at the Taz Metal-Casting Workshop cultural heritage site, as well as funding environmental campaigns.

NOVATEK continued to develop the Company’s continuing education program, which provides opportunities to gifted students, from the regions where we operate, to further their education at top rated universities, participate in NOVATEK internships and, upon completion of their studies, possible employment with the Company.

Recruitment and career guidance for promising employees start with the “Gifted Children” program implemented at School No. 8 in Novokuybyshevsk, school No. 2 in Tarko-Sale, school No. 81 in Tyumen and since 2018 – Secondary School No. 2 in Salekhard. Special classes are formed on a competitive basis from the most talented grade 10 and 11 students with above-average test scores.

In 2017, a resource center for industry-relevant student training – the Natural Science Center – was built and fully equipped in Tarko-Sale, Purovsky District, Yamal-Nenets Autonomous Region. The Center began to operate in 2018. The curriculum for pupils of 5th-11th grades includes: chemistry, biology, and physics. Activities in all subjects include solving of problems at the advanced level and training of pupils for national contests and competitions.

The Grants program for schoolchildren is aimed at academic and creative development and encouraging a responsible attitude towards studies. Under the program, pupils of 5th-11th grades are awarded grants from the Company. In 2020, the Company awarded 59 grants to students under this program. The Grants program for teachers is intended to raise the prestige of the teaching profession and create favorable conditions for developing new and talented teachers. In 2020, six teachers from the Purovsky District received grants under this program.

In an effort to create conditions for more effective use of university and college resources in preparing students for future professional activities, the Company has developed and successfully implemented the NOVATEK-University program. The program is an action plan for focused, high-quality training for specialists with higher education in key areas of expertise in order to grow the Company’s business and meet its needs for young specialists. The program is based at the Saint-Petersburg University of Mines, the Gubkin Russian State University of Oil and Gas in Moscow and the Tyumen Industrial University.

Students who have passed their exams with good and excellent results receive additional monthly payments. During their studies, the students are offered paid internships. This experience allows them to apply the knowledge obtained at lectures and seminars to real-life situations and gain experience in the professions they’ve chosen, while the Company receives an opportunity to meet potential employees.

Because of the country's epidemic containment efforts, only limited attendance was allowed for the museum exhibitions. As a result, the museums had to extensively use both existing and new online technologies and innovative solutions. The audience was encouraged to participate in online lectures and meetings, video conferences, interactive educational programs and debates, virtual tours of museum spaces that made the museum exhibitions open and accessible.

The Seventh Moscow International Biennale of Contemporary Art was held with the support of the Company. The Biennale's website offered a video tour and a platform to discuss the event's educational program.

In cooperation with NOVATEK, MMOMA hosted the “Pavel Leonov's Fantasy” exhibition of Pavel Leonov whose name is included in the World Naive Art Encyclopedia as well as the "Countdown" retrospective of Moscow conceptual art leaders Igor Makarevich and Elena Elagina.

In St. Petersburg, the epidemic was contained well enough for the museums to re-open already in late 2020, and with the Company's support, the “Knowledge is Power” exhibition dedicated to publishing and educating posters, opened in the Russian Museum.

In autumn of 2020, NOVATEK participated in organizing Russian Creative Week by supporting the educational program dedicated to art. The event offered a discussion platform for Russia's creative community.

The company rendered financial support to the Gogol Center for the development of the theater, which premiered new productions and organized a benefit concert for the medical staff in gratitude for their courage and service in saving lives.

In 2020, the Company remained a General Partner of the Moscow Soloists Chamber Ensemble under the direction of Yuri Bashmet.

NOVATEK attaches great importance to programs for the development of mass and high-performance sports. The Company, its subsidiaries and joint ventures regularly hold tournaments in the most popular and widespread sports: football, volleyball, swimming, ski, etc. In 2020, all tournaments were held in full compliance with the requirements of the Russian Federal Service for Surveillance on Consumer Rights Protection and Human Wellbeing (Rospotrebnadzor).

In the reporting year, the Company continued to promote the children and youth sports in the regions where it operates, supported the pilot federal innovative project “Become a Champion” intended for identifying children's predisposition to certain sports through testing.

In 2020, pitches for five-a-side football were built and equipped for the schools whose teams won the “NOVATEK – Step to Bigger Football” 2019 Indoor Football Cup among secondary school teams: three in Chelyabinsk Region and two in Kostroma Region. The 2020 championship was held in Kostroma Region. In Chelyabinsk Region and Kamchatka Territory, the competition had to be postponed to a later date.

The Company continued to support the Student Basketball Association. Because of the restrictions associated with the COVID-19 pandemic, some of the competitions could not have been held in person, and online tournaments and events had to be held instead.

In the reporting period, NOVATEK continued cooperation with the Russian Football Union as the General Partner of the Russian National Football Teams. The Company supported women’s volleyball club Dinamo (Moscow) and the NOVA Volleyball Club (Novokuybyshevsk).

In 2020, the Company continued to implement the projects aimed at helping children in dire need in the regions where the Company has its operations, in pursuance of NOVATEK's corporate charity policy.

In 2020, the work under the Telemedicine Center project (TMC) to equip and connect hospitals in Novy Urengoy, Tarko-Sale, Murmansk, and Kostroma to the unified telemedical network, was completed. Efforts were made to expand the TMC by connecting hospitals in Chelyabinsk and Tyumen to the Center.  In 2021, hospitals in Petropavlovsk-Kamchatsky and Magnitogorsk are also going to be equipped and connected to the TMC. Currently, hospitals in these regions are connected to the TMC under a temporary arrangement, which also makes medical consultations possible.

In 2020, the TMC helped to have 626 video consultations, a series of five lectures on pediatric anesthesiology and intensive care in December 2020, as well as regular online meetings and medical councils with relevant experts of the Russian Children's Clinical Hospital.

As part of the Targeted Therapy project aimed at helping children with cancer undergoing treatment in the Dmitry Rogachev National Medical Research Center of Pediatric Hematology, Oncology and Immunology, 120 children received help in 2020.

As part of the “High-Tech Equipment” project, the Company provided charitable assistance to the Mother and Child Health Center of Magnitogorsk in purchasing equipment for the neonatal intensive care unit.

Throughout the year, the Company provided targeted support to industry veterans, orphans and disabled children, and people with disabilities. In particular, the orphanages of Trinity Church in Kolomna and “Dunno's Town” in Moscow Region, as well as “Rodnik” orphanage in Ulyanovsk Region, received funds to purchase indoor air recirculation units and necessary medications. A muffle furnace was purchased for the Oktemsk school in Yakutia, which is used to fire ceramic products made by the students during classes. The Deaf-Blind Support Foundation “Con-nection” was allocated funds to improve the quality of life of its care recipients and to develop an implant.

In 2020, the key activities of the volunteer movement “All Together” remained unchanged: support for orphans and children with various diseases, the elderly and the disabled.